Since arriving in Switzerland almost two years ago now, I’ve had this hankering to visit one of its neighbors: Lichtenstein. I didn’t have a particularly sophisticated reason for wanting to visit. In fact, my principal incentive was simply due to the fact that it would be so much fun to be able to tell my American friends, “yep, I’ve been to Lichtenstein.” Because who goes to Lichtenstein? Nobody, that’s who. But we did, and I’ll tell you this: Turns out there is a lot more to Lichtenstein than the fact that its fun to tell people you’ve been there.

The first thing you need to know about Lichtenstein is that it is small. Really small. Look at this map.

Lichtenstein is a tiny place.

See Lichtenstein? It’s that tiny spot shoehorned in between Switzerland and Austria. No map exists that can fit the word “Lichtenstein” inside the borders of Lichtenstein. You’d be lucky to squeeze in the dot on one of its “i”s. Lichtenstein is the 6th smallest independent nation on earth. It’s just 15 miles long and about 7 miles wide. Only 37,000 people live there. Another interesting geographic distinction: it is one of just two countries in the world that is “doubly landlocked”, meaning not only is it landlocked, but each of its bordering countries is also landlocked. For some odd reason, I find that kind of interesting. (Which other country is doubly landlocked? As you most assuredly already know, it’s Uzbekistan.)

There is another interesting fact about Lichtenstein, which is that it is not actually a nation at all. It is a “Principality”, which is a sovereign state that is ruled over by a monarch with the title of prince. When we checked into our beautiful hotel, I asked who the photo of the couple on the wall was, figuring that it might be the owners of the hotel. Wrong! My bad, Lichtenstein! It’s the Prince and Princess! (Their castle is right down the street, so I suppose it makes sense to prominently display their photo, just in case they show up for dinner one night.) 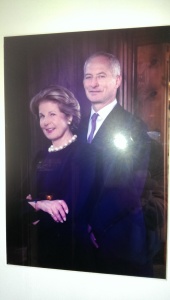 The Prince and Princess of Lichtenstein

We spent most our two days in Lichtenstein walking in the mountains. Therefore, the rest of this post will feature some of the awesome sights we saw. Here is a video I shot in an effort to convey both the extreme smallness and astonishing beauty of Lichtenstein. We rode a ski lift up to the top of a mountain and I stopped to take this video on the hike down.

This photo is the slope of the mountain above the chair lift. Those “fence-looking” things? Those are avalanche barriers.

They line open slopes with barriers to stabilize the slopes

On our second day in Lichtenstein, we took another hike along a cross country ski trail. (For you cross country ski “purists” that are concerned that hikers might destroy the trail, fear not. Trails are wide enough and designed for hikers, classical skiers, and skaters.) I took this picture with the idea that posting it might encourage my fellow skiers back home in Minnesota to come and visit us. (I’m looking at you, Jeff and Jane.)

The view from the ski trail is spectacular!

Here’s a photo I took of where we stopped for lunch. We got there first, and by the time we left, there were 6 or 7 other groups picnicking there. 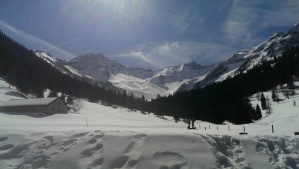 We sat and admired this view for 90 minutes

Another shot of the trail, along a brook which eventually feeds the Rhine River. 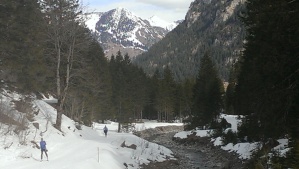 Finally, here’s something you don’t see every day, but that is commonly seen in Lichtenstein. It’s a yak. He was in a pen along with 7 or 8 other yaks. One of them tried to attack. Yep, thanks to the fence, I survived a yak-attack. 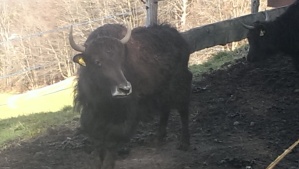 Yakety Yak, he didn’t talk back.

4 thoughts on “Small is Beautiful. And Lichtenstein is definitely both.”