One of the things I’m always reminded of as I travel around Europe is the way that certain common, everyday things are very different here than they are in the U.S. Cars, for example, are all much smaller over here. Sidewalks and streets are often made of stone, not concrete or asphalt. And then there are the trees. There are some really odd trees over here. Some of the trees are naturally odd; for others, it’s due in large part to human intervention. I’ll show you what I mean.

I’m pretty sure you can see these in the States, too, but they are much more common over here. Let’s start with the naturally odd trees.

I took this photo of the trunk of a tree that is very common in Geneva. It’s called a Lacebark Pine. Look at how closely the pattern and colors of the bark resemble military camouflage. It’s almost as if they used this tree to design military camo! 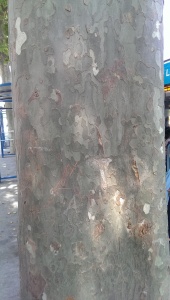 These trees are hard to find because they blend in so well to their surroundings.

Here’s another tree species that is a natural oddity. I believe this is a Blue Atlas Cedar. Notice how the lower branches are left to droop to the ground, then rise up again. The lower branches of the tree effectively become conifer bushes that surround the tree. Ever seen that in the U.S.? I haven’t.

For some reason, they don’t bother trimming the lower branches.

Here is a type of tree that is relatively common in Geneva. It’s called a Weeping White Pine. I took this picture a couple blocks away, in an apartment complex that looks like it’s straight out of Dr. Seuss. (Click on the photo to enlarge it, you’ll see what I mean.) I think the trees are a perfect fit for the building. 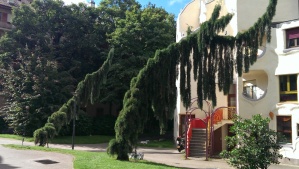 This one looks like something straight out of Dr. Seuss!

Here’s another tree right out of a children’s book. It’s called, for reasons that should be self-evident, an Umbrella Pine. 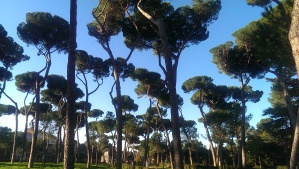 Here is another aptly named conifer tree, the Pencil Pine. This is a very tall, very skinny tree!

Okay, now let’s examine some of the odd-looking trees whose appearance has been significantly altered by human activity.

The Genevois are big on trimming trees. Don’t believe me? Just look at this picture. Click on it to enlarge it. I count at least seven tree trimmers going at this row of trees in a nearby street boulevard. I can’t identify this type of tree but they are ubiquitous throughout Geneva. And I don’t know why, but the City maintains these trees by annually trimming the “suckers” that grow out of the huge knobs that generate over time because they just don’t allow the darn things to grow naturally. As indicated, I don’t know why.

Tree trimmers out in full force!

The Swiss groom trees like some people groom poodles. Here are some very finely shorn conifers, that I think are Conica Dwarf Alberta Spruce. The natural shape of these trees is conical, but not as perfectly conical as represented in these trees. 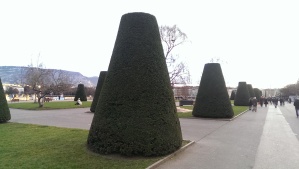 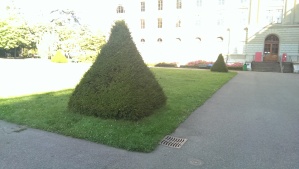 Moving back again to the deciduous family, here is another expertly trimmed tree called a Cone-shaped Taxus Baccata.

Finally, ’tis not the season to be jolly, but here’s a picture I took last year of a Christmas Tree. It’s sprayed with this weird white crusty material. Virtually all Christmas trees one encounters here are sprayed with some weird stuff in a variety of colors – typically blue, red, white or pink. But its always crusty, I know because I’ve touched it. Trust me, it’s crusty.

8 thoughts on “There are some weird trees over here!”