I love cross country skiing. And for the record, I don’t like downhill skiing. It’s too scary. I enjoy the serenity of cross country skiing. So this winter, for three main reasons, I’ve been working hard to get my kilometers in. Reason #1: This is our last winter in Switzerland. (Yes, the SwissSojourner’s remaining days in Switzerland are numbered. More on that another time.) Reason #2) It’s been a great winter for cross-country skiing in the nearby Jura and the French Alps. Reason #3: Our good friends Ed and Mary came to visit for a ski vacation! So I’ve had plenty of motivation to get out and ski this winter.

Our “go-to” destination for cross country skiing is the Jura National Park, just 45 minutes away near the town of St. Cergue, Switzerland. (Only a stone’s throw from France, though.) The Jura mountain range follows the France-Swiss border from Geneva and extends northward all the way to the Alsace region. Within an hour’s drive from Geneva, there are several great skiing options. And the drive is part of the fun! At just 1500 feet above sea level, there is no snow in Geneva. You have to drive “up” to get to the snow. In this video, which I produced with two hands firmly on the wheel, you can get a feel for the drive up to the crest of the mountain range, at around 4,000 feet above sea level.

Our newest favorite place to ski in the Jura is a placed called La Vattay. What I love most about La Vattay is that the area is dedicated exclusively for cross country skiing. What I love second most is that there are over 50 kilometers of beautifully groomed ski trails. What I love third most is the friends you make out on the trail. Cross-country skiers are almost always fun and friendly people.

Another thing about the skiers over here. They start them very young. I see this scene a lot, and it always makes me smile.

The trails at La Vattay are mostly through the woods, which is nice especially on a colder or windier day. Here’s a look from the trail. I made this video for Ed and Mary before their visit to pump them up!

Then Ed and Mary came! (Interesting note: Ed and Mary also happened to be our first ever visitors, and as it happens, they will also be our last. Like bookends.) Our first ski together was at a place on the Jura crest called Col de Marchailluz.

Top 3 on the podium!

…and here are Ed and Mary skiing in at the end of our 18 kilometer ski.

Another great place to cross-country ski is Chamonix, in France. So the next day we headed south from Geneva about an hour and fifteen minutes to ski the along the Chamonix Valley, in the shadow of Mont Blanc, Europe’s tallest mountain. The ski trail is mostly flat, except for more challenging part that Ed did, and runs along the beautiful Arve River. We came upon these blonde horses in a barn out on the trail.

I watched one of these horses take a “snow bath” rolling around in the snow!

Ed and Mary sandwiched Spain inside their Swiss vacation, so for the week they were gone, I did a little scouting on my own of a ski town in the French alps called Morzine. Morzine is known more for its downhill skiing, but there are some good cross-country trails too. I rode up to the top on a chairlift, clipped into my skis, and skied along the mountain ridge with some beautiful vistas, like this one.

A magnificent view from the trail in Morzine.

The day after Ed and Mary returned from Spain, we ventured back up the Jura to ski the red trail at La Vattay. Here’s a map of the trail network. Maybe if you click on it, that’ll enlarge it enough to be able to make out the different colors of the trails. The red trail route we completed was 11 kilometers.

I told Mary I was going to come back and do the black trail.

On Mary and Ed’s final skiing day, we set out early for the winding drive all the way up to the Morzine/Avoriaz area, about 90 minutes away. But fate intervened, and an incoming storm on the top of the mountain forced us to create a new plan, one that did not involve getting stuck in a blizzard at 6000 feet in the French Alps. Instead, I called our friends Philippe and Linda in Lullin, 30 minutes away along the scenic Routes des Alps where they invited us over and welcomed us with their customary great hospitality and the world’s greatest ice cream.

Ed and Mary left the next day, but I wasn’t done. I pledged that I would come back and do the black trail at La Vattay. (Refer to indecipherable map, above.) So I did. It’s called the black trail, but it doesn’t carry the same connotation as a downhill “black diamond” trail. It’s not more dangerous, it’s just more challenging. Longer uphills mostly. It does contain downhills too, of course, but my snowplowing skills are pretty advanced these days, so I succeeded in not wiping out. Here’s a photo I took of the trail marker that indicates the kilometers covered and the overall elevation change over the trail course. 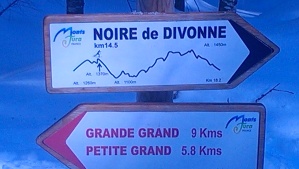 This map of the black course shows an elevation change of a couple hundred meters along the 18K course.

Its always more fun to ski with other people, but this solo ski was one of the best I’ve ever had. I even felt good enough to add on a bit of the red trail, so I completed around 25 kilometers in a 3 hour ski. I stopped periodically to rest, or chat with fellow skiers or to take in some sights. Here is a picture of something really cool that I stumbled upon way out on the black trail. I wonder who the artist is!

Look at this awesome mural!

As I mentioned, this is our last winter here. I think we have another 4 or 5 weeks of good snow left. I plan to make the most of it.