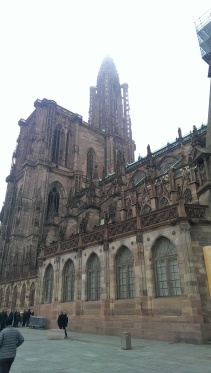 The Cathedral from the Plaza

I’ve written before about European cathedrals and how awe inspiring they are. We generally make it a point to visit the cathedral in every town we visit. While all grand European cathedrals have certain common elements – such as 100 foot high ceilings, cool statuettes and gargoyles, ornate doorways, and enormous pipe organs – each also has its own unique “personality”. For some, its distinctiveness is revealed in the structure’s exterior, for others, in its interior. Therefore, I am compelled to select two favorites. My choices are: For best exterior… the Cathedral of Notre Dame in Strasbourg, France. (Honorable mention: the Cathedral of Notre Dame in Clermont, France because it’s made of black basalt.) And for best interior… the Basilica of Notre Dame de Fourvière in Lyon, France. (Honorable mention: Saint Peters’ Basilica at Vatican City because its really really huge.)

The Cathedral of Notre Dame in Strasbourg is a classic Gothic design, as evidenced by its pointed arches, towering spires, and its emphasis on “verticality”. Here is a photo I took from the adjacent plaza, which doesn’t do it justice because it is impossible to capture the splendor of the entire cathedral in one photograph. (Click on the photo a couple times, and it magnifies the photo. You won’t regret it.)

Construction of the existing structure was started in 1176, on the foundation of an existing wooden cathedral that predictably burned to the ground. Construction of the cathedral was not completed until 1439. You read that right – it took 263 years to complete construction of this cathedral. The spire reaches 466 feet tall, and the cathedral was the world’s tallest building from 1647 to 1874, when it was surpassed by St. Nikolai’s Church, in Hamburg, Germany. Today it is the sixth-tallest church in the world and the highest existing structure built during the Middle Ages. I learned that the cathedral can be seen from far across the plains of Alsace and from as far off as the Vosges Mountains and the Black Forest, 30 kilometers away.

Click on this photo a couple times to see the precision of the statuettes on the cathedral’s west door. It’s amazing.

A unique feature of the exterior architecture of this cathedral is its famous west front, which is decorated with literally thousands of figures and is regarded as a masterpiece of the Gothic era by people who are knowledgeable about Gothic architecture, as well as many of those who aren’t, myself included. 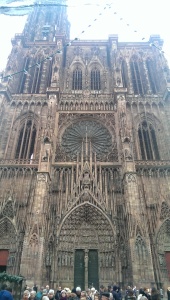 The Cathedral from the front. Fog obscures the peak of the spire

The towering spire pictured below is unique because it is one of the first cathedral spires whose means of support relies substantially on design engineering and craftsmanship. While previous facade designs were certainly drawn on paper prior to construction, Strasbourg has one of the earliest facades in which the construction is thought to be inconceivable without prior drawing. A professor of architecture at the University of Iowa named Robert O. Bork has studied the construction of the cathedral and said that the design and construction of the spire utilizes a series of rotated octagons for support. These more complex structural features represent a departure from earlier “Romanesque” architecture which relied on solid walls and simpler designs to support vertical structures.

Strasbourg Cathedral represents one of the earliest uses of architectural drawing.

Just for good measure, here are a couple final fun facts about the Strasbourg Cathedral of Notre Dame:

Cathedral from down below on the banks of the Sôane River

My other favorite European cathedral – “Interior Category” – is the Basilica of Notre Dame de Fourvière in Lyon, France, and it isn’t even close. (In case you weren’t aware, there are beaucoup cathedrals named “Notre Dame” all across France.) This relatively young cathedral – by European standards – was built between 1872 and 1884.

I took this photo (below) from the plaza at the main entrance, which is on the opposite side of the cathedral. 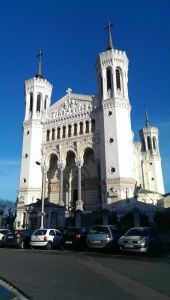 Upon entering the cathedral, the first thing one notices is that it is much brighter and more colorful than a typical Gothic cathedral.  The second thing one notices is the indescribable “ornate-ness” of the entire interior, from the elaborate mosaics covering every square inch of the floor to the gold and blue decorative mosaics and art covering every square inch of the walls, to the beautiful Greek columns towering to the ceiling, to the glittering chandeliers hanging from said ceiling, to the mosaics on the ceiling itself.  While much of the interior of Gothic cathedrals are bare stone, there is quite literally not a square inch of the Notre Dame Cathedral in Lyon that is not exquisitely decorated.  The thought that occurred to me as I stood and attempted to take it all in was whether the entire interior was designed in advance, or were certain elements added over time.  I learned that certain “finishing touches” were completed as late as 1964.

If a picture is worth a thousand words, here is the equivalent of 4,000 words that attempt to capture the sheer magnificence and beauty of this cathedral. 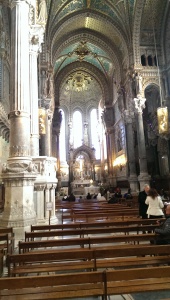 Look at the mosaic! Each tile is about a half-inch square!

As spectacular as they are, I confess that many European cathedrals can begin to look and feel a bit alike after a while. Not true of these two cathedrals. These are truly one of a kind.

6 thoughts on “I’ve visited dozens of European cathedrals. Here are my two favorites.”