Followers of this blog are aware that one of my favorite things to do is go hike up Geneva’s “neighborhood mountain” Le Salève.  I first wrote about it HERE when I unexpectedly hiked both up and down the mountain.  And I recently wrote about it HERE when I discussed some of the fun and interesting people I’ve met on the way up. I first learned that it was possible to hike to the top in the summer of 2016, and since the mountain is just a short bus ride or car trip from our apartment, I soon found myself using it as my own personal “stair master”.

My sons Pat and Chris were in town on a visit that summer, and so naturally I took them for a hike up the Salève.  One of them asked me how many times I’d hiked it, and it was easy enough for me to count, since that was just my 5th time up.  Then a funny thing happened: from that day on, I kept count of how many times I had hiked to the top. Shortly thereafter, I set a completely irrational goal for myself: I would hike up the Salève 100 times before our time here in Switzerland is done.

As a reminder, here’s what the mountain looks like from “base camp”.  I remember that the first few times I prepared to hike it, the view from down below was a little intimidating.  But the more I did it, the less threatening and more fun it became. 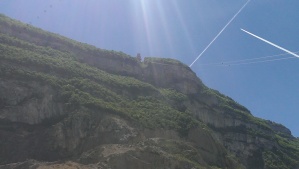 That’s my destination, up there just under the airplane contrails.

Another thing I learned about the mountain 30 or so hikes in was that there are two ways up. For the first 30 hikes, I always took what I came to call the “Easy Salève”. On the map below, the Easy Salève is marked in yellow. It’s only about a 4-and-a-half mile hike to the top, but you gain about a half mile of altitude on the way up. The “Hard Salève” is marked in white and is a 7 mile hike that takes you up through the “Grand Gorge” and terminates a little higher on the mountain.  (As one can see from the map and photos, the Salève is a long mountain, not one with a single peak at its summit.) 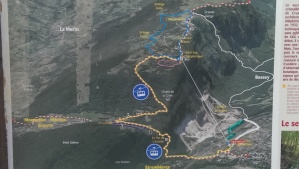 The Salève trail map.  The “Easy Saleve” in yellow.  The “Hard Saleve” to the right in white.

Because the Hard Salève takes a good hour longer to complete, most of the time I opted for the quicker Easy Salève.  I didn’t keep a precise count of my Hard Salève hikes, but I estimate that I completed that about 20 times. So more often than not, my objective for the day was to get to the mountain, go up the Easy Salève, get back home, and get on with the rest of my life.  But then one day, I said to myself, “I wonder how hard it would be to complete two Salève hikes back-to-back, because if I’m going to get 100 of these hikes in, I might need to pick up the pace a little bit.”  So on numbers 13 and 14, a day I had a little more time on my hands, I decided to attempt my first “Double Salève”.  Here’s a selfie I took after completing the epic feat. 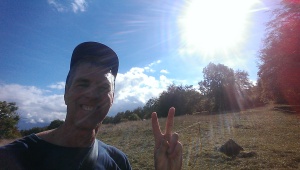 Another challenge that someone trying to hike the Salève 100 times needs to confront is weather.  The téléphérique (cable car), which is my preferred means of transportation back down the mountain is out of service from December through February, so unless you’re willing to hike both up and down in the snow, you have to do most of your hiking during the other nine months of the year.  But even then, sometimes you can’t avoid encountering a little of the white stuff above a certain altitude.  For example, I shot the two photos below at the same spot on two different hikes.  Notice how the trail on the left looks a little more enticing than the same trail on the right. 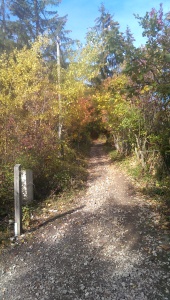 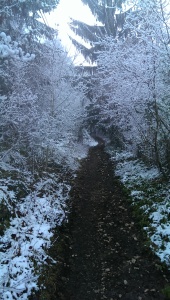 Most of the trail consists of packed earth and rocks, but at certain points the trail forces you to gain significant altitude in a short distance.  So for those segments, the pioneers who laid this trail out used the technique illustrated in the photo below.  These stones are planted into the steep trail at about a meter apart for erosion control, but also to provide “steps” for the climbing hiker.  I always counted these steps as I ascended them on my way up to the village of Monetier, the “halfway point” of the Easy Salève: 108. 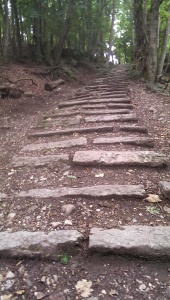 When I tell people that this is my favorite hike and I intend to do it 100 times before all is said and done, I often get the following reaction (from non-hikers, mostly): “Doesn’t that get boring?” No, it’s not boring at all.  Each hike seems to come with some unique experience that makes it different from all of the others.  Sometimes its the weather that makes the difference, or the people I meet on the way up, or the people I’m hiking with that day.  And then sometimes something completely unexpected happens.  Like this:

Then about a year ago, I was ready to attempt a new Salève challenge.  By this time, I had completed 8 or 9 “Double Salèves” (up the Easy Salève twice back-to-back) but I had not yet attempted what I came to call the “Salève Figure 8”: Up the Hard Salève, down the téléphérique, up the Easy Salève and back down the téléphérique.  That’s at least a 4 hour hike involving over a mile of vertical ascent.

Here’s a video I shot from “base camp” (the parking lot) that shows the mountain and the “Figure 8” hike I was preparing for as I approached my 100th hike to the top.

Of course, the best time to do this hike was on a good weather day.  I’ve tried to describe the feeling one gets after a long hike to the top, and the magnificence of the view from the top, but its impossible to describe with mere words.  On clear days, the view toward Europe’s highest peak Mount Blanc and the surrounding “massif” is so spectacular, it takes what breath you have left away.  On clear days, I would stand or sit there for 30 minutes or so and do my best to burn the image of that view indelibly into my memory. (Trust me, it looks even better in person.)

Walking down is not nearly as fun as hiking up, and it hurts my toes, so this is how I would (almost) always go down. 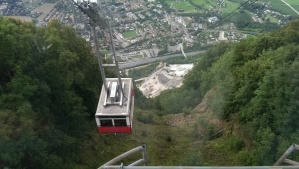 Meet my good friend and notoriously-slow-Snickers-candy-bar-eater Pat M. He was just here for six days. I’ve known Pat since we were teammates on a powerhouse third grade boys soccer team back in the late ’60s. These days, Pat spends much of his time working outdoors as a wetlands scientist so I knew he would be up for a solid week of hiking and exploring in the Swiss and French Alps. He did not disappoint. END_OF_DOCUMENT_TOKEN_TO_BE_REPLACED

I am asked from time to time, “what’s your favorite European country?”

There’s something to love about every country we’ve visited, but I never hesitate in responding: It’s Italy. Italy totally rules. It’s got everything: coastlines on two seas, magnificent architecture, the art, the fun-loving people… I could go on and on, so I will for a minute: the food, the historic cities both large and small, the wine, the scenery… So when you decide to visit Italy, there are lots of really good options.

If wine and scenery are your key criteria, I recommend visiting the Piedmont wine region in northwestern Italy. END_OF_DOCUMENT_TOKEN_TO_BE_REPLACED

Followers of this blog will recall my affinity for the Lauterbrunnen Valley and the mountains of the Bernese Oberland region, including the Eiger, Monch, and Jungfrau mountains. I’ve taken virtually every visitor we’ve had to Lauterbrunnen, usually incorporationg the hike between Grutschalp and Murren, then down to Stechelberg and back to Lauterbrunnen through the valley.

But every time I’ve been there, when the weather was clear, I’d glance up the valley to the highest peak, called Schilthorn and say to myself, “Some day I will hike all the way up there.” I mentioned this to one of my favorite hiking companions, Patrick, who was in town for a visit, and the two of us decided it would be a great adventure and a lot of fun to hike it together. END_OF_DOCUMENT_TOKEN_TO_BE_REPLACED

I’ve written before on hiking the Cinqua Terra trail along the Mediterranean coast in northern Italy, an adventure I’ve done twice – once with Patrick and again with my friends Ken and Jane. This time, on a trip to Italy with our most frequent visitors Cliff and Ellen, we had the opportunity to explore a new stretch of the Italian Mediterranean coastline, the Portofino peninsula. END_OF_DOCUMENT_TOKEN_TO_BE_REPLACED

One feature of many European cities that I especially enjoy and that distinguishes them from a typical American city is the craftsmanship that goes into paving the streets and walking surfaces. Wander around virtually any American city, and what do you see? Concrete and asphalt mostly. But wander around any European city, and the the streets, sidewalks, boulevards, plazas are very often characterized by beautiful stonework that is itself an art form.

We visited Lisbon a few months back and since we love to explore every city we visit by foot, we discovered that Lisbon is a city where virtually all of the sidewalks and plazas are themselves works of art. END_OF_DOCUMENT_TOKEN_TO_BE_REPLACED

We were visiting friends in Paris a couple months ago, comparing notes about places we’d been in Switzerland, when my friend asked me, “Have you been to Lauterbrunnen?” When I replied in the negative, he responded, “Oh, you’ve got to go to Lauterbrunnen.” The very next weekend, we got in the car and traveled the 2 hour 15 minute drive (which is a lovely trip by the way, past Gruyère, Bern, and Interlaken) to go and see how beautiful this area is for ourselves. END_OF_DOCUMENT_TOKEN_TO_BE_REPLACED