Winter weather in Geneva can be a little depressing. With the alps to the south and the Jura mountain range to the north sandwiching Lake Geneva and the city, it’s not uncommon to go two or three weeks without seeing the sun as a thick, impenetrable fog settles in over the city. 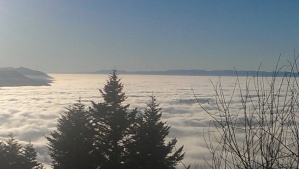 So what can one to do to escape the dreariness? Throw some skis into the “boot” (that’s what they call car trunks over here) and head up into the mountains! Geneva is about 1,200 feet above sea level, but just a 45 minute drive away, you can pierce the cloud cover, and get up to the ridge of the Jura mountain range, which is at about 4,000 feet, and get a respite from the “soup” everyone is suffering through down in the city.

At this altitude, winter takes on a whole new charm. There’s plenty of snow up here from December into April. Most of Geneva’s winter sports enthusiasts gravitate to the popular downhill slopes in places like Chamonix, Verbier, and Zermatt. These are all beautiful places, of course, but for my money I much prefer the peace and serenity of a wooded cross country ski trail over the crowds, noise, lines, lift fees, and overall hassle of renting skis that the downhill experience involves. That, and I’m a pretty crappy downhill skier, and I don’t want to join the legions of people I see walking around town with a cast or brace on their knee. (I’m not making this up… I see a lot of seemingly healthy young people limping around with crutches and leg braces this time of year.)

We seek refuge from the fog by driving up to the ridge of the Jura mountains, where we get out of the car, strap on the skis, and 5 minutes in, we’re striding off into the woods on a beautifully groomed trail on about 30 inches of snow. We’ve discovered a place called Marchairuz, which has become our favorite place to ski because there are gentle rolling “hills” which affords us the opportunity to get in some good exercise skiing in the “classic” (alternate stride) form, with occasional but not dangerous downhill segments, and fewer steep uphills that require “harringboning” up the slope, which for obvious reasons, isn’t as much fun.

One a recent Friday, I had some time on my hands, and I decided to escape the dreariness of the city and head up to the Jura for a good long ski. I drove to Marchairuz, parked the car and headed off in the direction of a place called La Givrine, 12.5 kilometers away. Here’s a photo I took of a map that is a woodburned image of the trails leading away from Marchairuz, where I started. 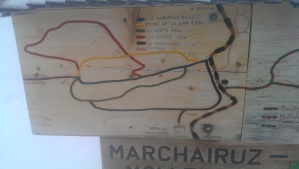 I skied out along the blue trail.

I wanted to give my readers a sense of what it feels like to cross country ski along the trail, but its tricky to ski and record video at the same time. Ordinarily, one’s hands are occupied with the task of using the poles for balance and propulsion. So I looked for a segment of the trail that offered a gentle downhill slope so that I could let gravity do some of the work for me while I held both poles in one hand and recorded video and with the other, all while offering an informative narration. Here’s how that turned out. Its a two-minute video, but I encourage you to watch it until the end, when something kinda funny happens.

Don’t worry, other than my pride and dignity, it didn’t hurt at all.

A few kilometers up the trail, I encountered these guys. I wasn’t aware that there was such a thing as ski patrol on cross country trails, but apparently, that’s a thing.

Here was my ride home if that wipeout had ended badly.

My destination was a ski lodge/restaurant along the trail that we had been to the previous weekend. (We approached it from the opposite direction that day…) As I indicated, it was a pretty long ski just to get out to my turnaround point, but eventually I could see the building off in the distance. When we were there last weekend, there were probably 50 other skiers resting, and enjoying a hot chocolate or bowl of soup.

It was closed this day, but this place is hopping on the weekend!

And here I am at the sign indicating my turnaround point. 12.5 Kilometers out, and now I’m turning around for the 12.5 kilometers back to Marchairuz. 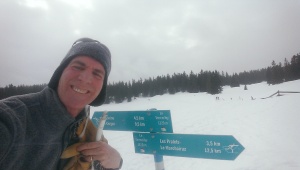 Here I am at the turnaround point, halfway home!

It was a great day of skiing. Three hours, out and back. On the way back, I figured it might be nice to include another video that demonstrates that I can actually stay on my feet for an extended period of time, so I’ve included another short video of me not wiping out below. Some skiers are a lot faster than me, as the video below shows, but I’m at a point where I’m mostly in it for the scenery and the serenity. I’m much less interested in going fast as I once was in my younger years.

7 thoughts on “Wintertime in Switzerland means cross country skiing in the Jura Mountains!”