Every year in the early fall, festivals are held across Switzerland’s alpine villages that feature herds of cows wearing silly hats and large cowbells parading down village streets, marking the end of the cattle’s summer grazing in the high alpine pastures. This is a custom that has been taking place across Switzerland for generations, and we recently attended a festival in L’Étivaz to take in this iconic Swiss celebration.

No point in burying the lead.  Check this out!

The way these processions work is that each family and its cows has its own parade. So for any festival, you get to watch not just one, but eight or nine cow parades. It’s quite a site, watching 30 or 40 cows being escorted through town by entire families. It’s actually very moving, seeing family members of all ages – we saw one woman carrying her infant child – pridefully walking their cattle through town. They wear traditional Swiss costumes, as shown in this photo. 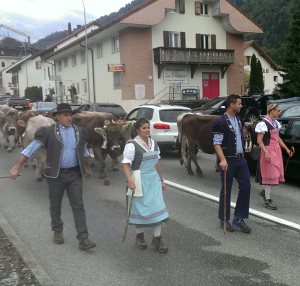 Men in their tracht; women in dirndl.

But what makes the parade really fun are the cows. Families go to great lengths to decorate their cows with colorful floral hats, and ceremonial bells. Here are some examples. 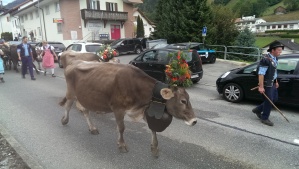 Someone strapped this lovely hat on this cow’s head.

Look at the site of her bell! (Fear not, PETA, these large bells are used exclusively for ceremonial purposes.)

These cows didn’t have silly hats, but they have bells!

There is about 30 minutes between family processions, which means there is plenty of time for the festival’s other activities. One of those activities is to listen to bands play their traditional long Swiss Alpine horns, which are called – predictably – Alphornes, or alpinehorns. It might be difficult to tell from the video, but there are no holes to make different tones. So it’s more giant kazoo than your typical woodwind instrument. Listen for the harmonies in the music. It’s very beautiful.

Cows make milk, and mild makes cheese, and the L’Étivaz region is perhaps the second most famous cheese making region (next to Gruyere, which is just down the road) in Switzerland. We had time for a tour, where I learned that it takes 10 liters of milk to make one liter of cheese – which explains why we saw so many cows marching through the village streets. I took this photo of one of the storage areas inside the cheese manufacturing facility. 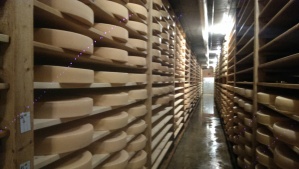 The festival also affords opportunities to participate in tests of athletic skill and strength common in Swiss folklore. There is a sawdust pit for wrestling (which I didn’t do) and a Unspunnen Stone throwing competition (which I did). The Unspunnen stone weighs 36 kilos (just over 80 pounds) and the idea is simply to see how far you can chuck it. I watched a guy before me do it, and he was about 5 feet 7 tall, had arms that looked like legs, and obviously knew what the hell he was doing. He lifted the damn thing over his head, ran to the launching line and heaved it. Pretty far. Then it was my turn.

Let’s just say I didn’t win, and leave it at that.

At some point, we will return home to the U.S., bringing with us great memories of our experiences here. And you know what else we’ll be bringing home? This authentic Swiss cowbell, that we bought at the L’Étivaz Festival! 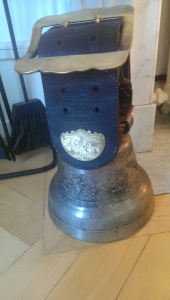 4 thoughts on “The Swiss “Désalpes” Festival is a celebration of cows like no udder!”