About three months ago, as incentive to keep working out, I registered for the Lausanne Triathlon. And not for one of those wimpy “sprint” triathlons, either. This one is classified as the “Olympic Distance”: 1.5 kilometer swim (in Lake Geneva); 40K bike ride; and a 10K run. It’s the same distance that Great Britain’s Browlee brothers went gold/silver in Rio.

It was a beautiful day for a race, temperatures in the high 70s, light breeze, partly cloudy. The best part was that I had my own cheering section, as the whole family was in town for the race. Here I am prior to the race in the transition area. (All photo and video credits: Chris) 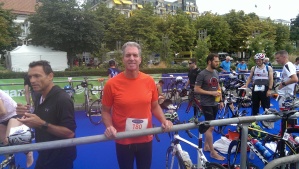 Pre-race in the transition area. “Where are all the other old dudes??”

When I was younger, I did a few of these, but this was to be my first in about 20 years, and my first ever with two metal hips. My training regimen consisted mostly of hiking up the Salève which as I’ve documented in previous posts, which is similar to climbing stairs for an hour and a half. I’ve also been swimming 3 or 4 days a week, because that is the one leg of the race where death is conceivable if you are not adequately prepared. I didn’t run at all, because that tends to aggravate my hips; nor did I do much cycling because that tends to aggravate my ass, and because I figured that “nature’s stairmaster” (hiking the Salève) was adequate preparation for both the running and cycling legs of the race.

So here’s a synopsis including some photos and short videos of how it all went down.

The Swim
Fact is, I am a pretty strong swimmer, so as expected, that was my strongest leg. Problem is, that portion of the race is too short so even a good swimmer can’t gain too much time on a mediocre swimmer (and virtually every competitor is at least mediocre, otherwise they would drown.) It’s a long swim, though, 1.5 kilometers of Lake Geneva, so you never get to grab a wall, which occurs every 25 meters in a pool training swim.

Here’s a photo of my wave getting ready for the start. Yes, that is a lot of swimmers. 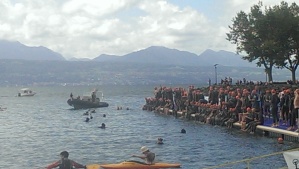 That’s me, 26th guy on the left in the orange cap

There are just a couple things you want to avoid on the swim. First and foremost, you want to avoid drowning. That would not only be embarrasing, but would cast a pall over the whole event. Second, be careful not to get kicked in the head by other swimmers. The first 2 or 3 hundred meters is total chaos with people swimming literally on top of each other. The good news is that the faster swimmers tend to be the “kickers”, as opposed to the “kickees”, so I was good to go there. Thirdly, try not to ingest too much lake water during your swim. I’m generally pretty good at this but at the start, something kind of funny happened. As about 300 of us took off from a treading water start – and literally on my first stroke – I got a gut full of Lake Geneva when a wave hit me… I managed to laugh it off, figuring that at least I was properly hydrating!

I finished the swim in 30 minutes, ahead of many other people.

The Bike
My transition from swim to bike is a little slow compared to people that take this sport much more seriously than I do. They seem to be able to get out of the transition area pretty fast, but I have a whole list of stuff to do, like hang up my bike, set down my goggles, put on my shirt and shorts, my helmet, my sunglasses, and running shoes. So I figure those tasks take as long as they take and there’s no point in trying to rush it. Once I took care of all those things, I headed off on my $400 bike to race all the younger, fitter people on their $2,000 bikes. It went pretty much how you would expect.

The bike leg was six laps around a 6.5 K circuit in the city. The first kilometer or is a pretty steep climb, which I’m slow as hell at. I’d like to be able to assign 100% of the blame to my bike, but in fairness to it, I’m also just a pretty slow bike rider. After leveling off for a kilometer or so, there is about a 1.5 k section that is all downhill, where you don’t even have to pedal, and I got up to 30 miles per hour (I have one of those “spoke computers” that measures various stuff, that’s how I know.) Seriously, I was really cruising going downhill, I felt like I was in the Tour de France! Problem was, a lot of these dudes flew by me going 40, so I lost a lot of ground on the bike. Look at this short video and you’ll see what I mean. That one dude passes me like I’m standing still!

It was fun hearing the cheers of the adoring crowd shouting “Allez! Allez! Allez!!” Here is another quick video Chris shot of my last lap from a pedestrian bridge over the course. One thing you will probably note although I’m hoping you don’t is that if you look at the left hand side of the frame, you will see there are a few more runners at this point then bikers, which bodes ill for my chances of participating in the post race awards ceremony.

The Run
Excuse my French (everyone else does), but then I had to immediately take off and try to fricking run 6.4 fricking miles. That sucked. Good news is my hips held up just fine, but as you might expect, I was pretty tired at that point. It’s 4 laps of a 1.6 K loop down by the lake. I kept a decent running pace for the first 2 laps, and by that I mean I was still sort of running. On the third lap, I made it almost all the way around but did have to take a couple short breaks of walking fast. Then on the 4th lap – I told Chris it would be my “victory” lap – I did hit the wall a little bit and probably walked for 2 or 3 hundred meters of the 1,600 meter lap. I tried to look pretty good crossing the finish line, though!

Here I am feeding off the adoration of the crowd. 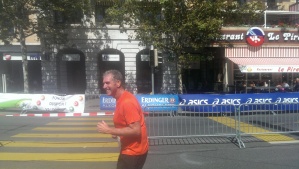 I am actually in more pain than that suggested by this photo.

My time was an unimpressive 3 hours and 43 minutes. Seems slow, but as I said, a lot of that bike ride was uphill. I beat a few people. And I beat all the DNF (did not finish) people. And I think I came in first of the “I got two metal hips” class, so mission accomplished.

The last funny thing that happened was just as I crossed the finish line, the Master of Ceremonies approached me – I was all alone when I crossed the line on account of my relatively long race – and he called me over and asked if he could interview me, which is part of his schtick. The interview is broadcast over some giant speakers to anyone within 500 metyers of the finish line. So the funny part is, he’s interviewing me in French, and I hung with it pretty well for about 30 seconds (he asked me where I was from, whether I had ever participated in the Lausanne triathlon before, whether I’d ever been to Lausanne, and recommended that I come back and hike the mountains around Lausanne, to which I had to point out that I already had hiked pretty extensively in the area, and then he wanted to keep talking, but I was kinda tired at that point, and I have a tough enough time conversing in FRench even when I haven’t just completed a triathlon, so I just gave him a smile and the old “merci et au revoir!” and I was gone! Nancy got the last bit of it on video. It’s pretty funny.

5 thoughts on “I finished the Lausanne Triathlon! (…and came in 310th place…)”