Oenophilia: Greek for the love (philia) of wine (oinos). But oenophilia goes beyond a mere love of wine, it means a devotion to wine, how it’s grown and made and tastes. I enjoy wine. My brother-in-law Cliff and sister-in-law Ellen (beau frère and belle soeuer, en français) are true oenophilias. They recently visited us in Geneva, so we made a point of driving down to the Rhône Valley in southern France, home to one of the most famous wine producing regions in the world. Our destination: the vineyards around the village of Châteauneuf-du-Pape between the cities of Avignon and Orange.

Châteauneuf-du-Pape is the name of the village, but also the name of the “appellation” – a legally designated and protected geographical indication used to identify where grapes for a wine were grown. Châteauneuf-du-Pape is one of the most renowned appellations of the southern part of the Rhône Valley. It’s history, as its name suggests (the literal translation from French is “new castle of the Pope”) is directly related to papal history. In 1308, Pope Clement V, formerly the Archbishop of Bordeaux, relocated the papacy to the town of Avignon. Clement V and subsequent “Avignon Popes” were said to be great lovers of Burgundy wines (of course they were!) and promoted it during the seventy-years that the papacy was located in Avignon. The vineyards are much prettier prior to the harvest, and since we happened to be there in late November all the vines were bare. Still, the extent of the vineyards is massive, often they extend as far as the eye can see, in virtually all directions. Here’s a shot I took as we drove toward one of our wineries.

A vineyard in the Chateauneuf-du-Pape region near Orange, France

We visited six different wineries over the two days, so I did manage to learn a thing or two about wine. For example, the French AOC system (“Appellation d’Origine Controlée) is the name of the system regulating the designation of appellations of wines in France and around the world. Again, the principle purpose behind the AOC system is based on the notion that the land from which the grapes are grown imparts a unique quality in the wine that is specific to that particular growing site.

Terroir is the French term given to the specific elements of a vineyard that determine the wine’s character. The three elements that comprise a vineyard’s terroir are climate, soil type, and geomorphology (features associated with the earth’s surface, such as topography). Our hosts at the wineries said that the role of a winemaker is to bring out the expression of a wine’s terroir. This point is reflected by the fact that the French word for winemaker, vigneron, is more precisely translated as “wine-grower” rather than “winemaker”.

The characteristic terroir of Châteauneuf-du-Pape comes from a layer of stones called galets (“pebbles”) places between the rows of vines. The rocks are quartzite, deposited by Alpine glaciers and have been smoothed over millennia by the Rhône River. The stones retain heat during the day and release it at night which can have an effect of hastening the ripening of grapes. The stones also serve as a protective layer to help retain moisture in the soil during the dry summer months. I didn’t take the photo below, (see credit) of the vines of Châteauneuf-du-Pape growing in vineyards filled with galets. 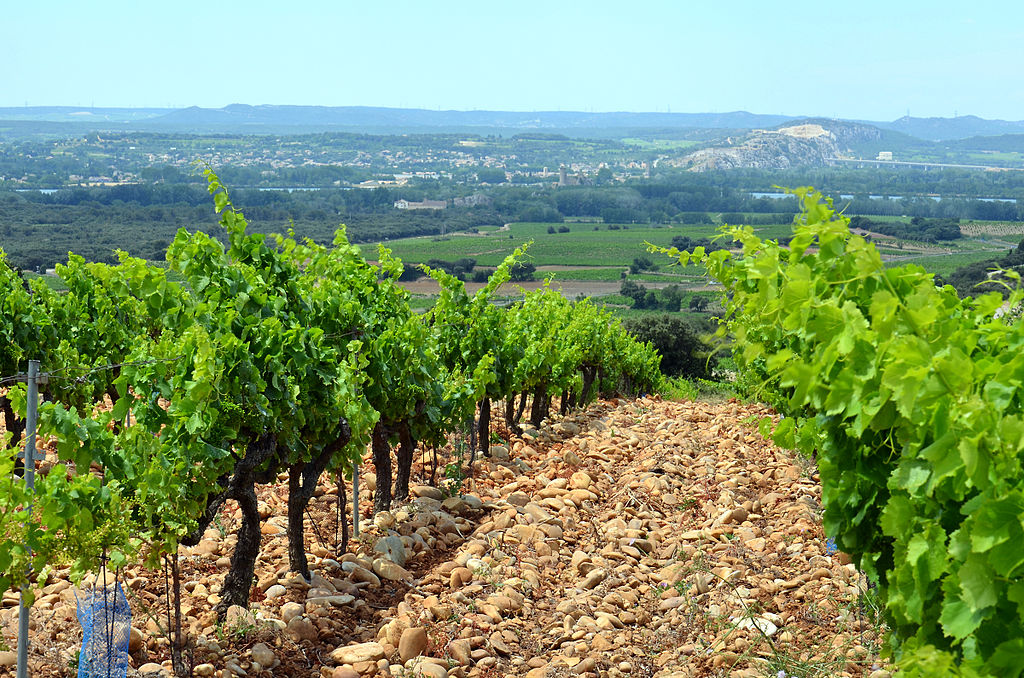 The AOC regulates the types of grapes that can be used to produce wine in a given region. We learned that in most red Châteauneuf-du-Pape varieties, there are three main types of grapes that are used, in various combinations depending on the preferences of the winemaker. The most common is the Grenache noir, which – I was told – produces a sweet juice that can resemble almost a jam-like consistency when very ripe. A second grape commonly used in the region is Mourvèdre, which can add “elegance and structure” to the wine, and the third common grape is the Syrah, which is typically blended to provide color and spice. (Note: One of our winery hosts introduced us to his dog. His name? Syrah!)

Here we are at one of the wineries, tasting wine.

This particular blend was complex yet balanced, slightly tannic with just a hint of a fruity, smokey, and herbal bouquet, and good legs.

Here’s two bottles of red wine I bought. Note the embossed bottle on the right.

Finally, an important lesson that one learns is the benefits of “cellaring” wine to allow it to age to perfection. We were advised to allow the wine to age an additional 3-5 years to really enhance its flavor. I bought eight bottles, and let’s just say that I’m going to fall substantially short of the recommended cellaring time frame. Things might be different if I had a cellar, but I don’t.

4 thoughts on “A Cure for Oenophilia: Wine Tasting in the Rhône Valley at Châteauneuf-du-Pape”