One of the things I like about living in the heart of Europe is that so many beautiful and extraordinary European cities are just a short plane ride away. (See my earlier posts on Paris, London, Dublin, Budapest…) I have a list of cities that I want to visit during our time here, and a couple weeks ago, I crossed Rome off that list.

We spent a long weekend in Rome, and during our stay we walked from place to place, taking guided tours, visiting museums and other tourist attractions, or just moving from point A (wherever we happened to be) to point B (parks, monuments, neighborhoods, restaurants, etc…) I looked at our map, and I estimated that we walked about 25 miles during our 2 and a half day visit. This post includes some of the places we visited and the sites we saw, including some of the most iconic art and architecture in the world.

Aside from its incredible beauty, Roman art was also intended as a method of propaganda. Many dialects and languages were spoken within the empire, so conquering Romans decided that the best way to convey their message of superiority, legitimacy, and victory was through art. One Roman emperor, Emperor Augustus who ruled from 30 BC to 14 AD, was especially notable for his use of art (sculpture and architecture, in particular) to present the glory and piety of Rome. According to my research, he was regarded as a more peaceful Emperor than many of those who preceded and followed him, and was more concerned with promoting the virtues of the Roman Empire that existed at the time rather than expanding the Empire. “Augustan Art” was used as a propaganda tool to commemorate the Emperor and his achievements and to celebrate the Roman Empire and its far-reaching power.

Other works of art throughout Rome were brought from other conquered cultures, most notably the ancient Greeks and Egyptians. Here is an example. This obelisk stands in the middle of a square and was taken from Egypt and moved to Rome. Look closely, there is a cross stuck in the top of the monument. That wasn’t there when the monument was first erected in Egypt! 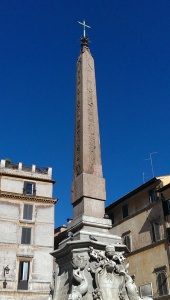 Here’s an Egyptian obelisk with a cross stuck on top of it.

The Romans often commemorated their conquests by constructing monolithic monuments like arches and columns. The Arch Of Titus, built in the year 82 AD and pictured below, was erected to memorialize a rebellion that had been put down by the Romans. Its tough to see in the photo, but the “story” shown in the relief sculpture depicts the Romans returning from battle with heaps of captured armor. These provincial reminders were erected as symbols of Rome’s power. 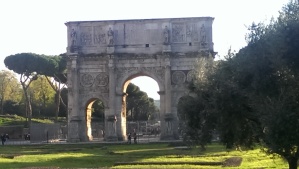 The Arch of Titus is said to be the inspiration for later arches, such as the Arc de Triomphe (Paris), Washington Square Arch (Manhattan), and the Golden Arches (everywhere).

Another Emperor, Hadrian, put down a Jewish revolt in the year 132-135 AD and built the monument pictured below, called the Pantheon, with the spoils of the war. Hadrian and his successors actively promoted the idea that the empire was united by an overarching set of values and tastes, and he used propaganda in this way to foster loyalty to the Empire as the protector of these values.

The Pantheon at night, hence the darkness

That’s all for the history lesson. The rest of this post simply shows some photos I took of some of the more interesting attractions and sites we took in.

We visited the Borghesi Art Gallery – which is amazing – and I took this photo of my favorite Greek God, Bacchus, the God of Wine.

I imagine him saying, “I’ll trade you these grapes for some pants!”

We took a walking tour through the Vatican, which included Saint Peter’s Square, Saint Peter’s Basilica, and of course, the Sistine Chapel. The picture below is a shot I took to try to convey the size of the Basilica, which is the largest church in the world. (Of course it is.)

St Peter’s Basilica is really about 6 giant cathedrals all in 1!

Unfortunately, they don’t allow photographs in the Sistine Chapel, and although I was tempted to just sneak one, I figured I’d better play it safe and not risk getting caught committing a sin right there at the Vatican. The following two photos are of two other ceiling frescos, the first from another hallway at Saint Peter’s and the second from a museum we visited whose name I can’t remember. You really have to see these works of art in person to appreciate them. They are unbelievably detailed and beautiful. 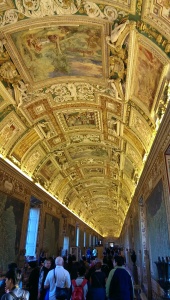 The Trevi Fountain, pictured below, was just a couple blocks from our hotel, so we walked by it three or four times. it is the largest Baroque fountain in the city and one of the most famous fountains in the world. (As I came to understand it, you can tell whether a sculpture is “Baroque” if the male subjects are built like NFL linebackers. Expand the photo, and you can readily see that a couple of those guys are pretty “jacked”, as it were.) This fountain was just reopened the week before we visited after a 20-month, 2.2 million euro restoration effort.

Trevi Fountain, recently restored, consistent with the adage: “If it ain’t Baroque, don’t fix it.”

Something that always blows my mind that I have mentioned in a previous post regarding the construction of European cathedrals is the massive scale of many of the buildings and how in the heck they were able to build such structures with the existing technology and tools. Here’s a photo I took of the Roman Coliseum, a structure built in the first century AD that had capacity for 80,000 spectators. Apparently, there were few better entertainment options than gladiatorial contests, mock sea battles, animal hunts, executions, and an occasional drama.

Sadly, a lot of people were killed in the most horrible ways imaginable in this arena.

In conclusion, you might have noticed the alliteration employed in the title of this post. I’ll conclude with a final entry: The ARoma of Rome isn’t bad, until you get this close to a horse.

Me and a horse, of course.