During our recent visit to London, I was struck by the town’s various dichotomies. In the realms of architecture, the arts, and cultural traditions, one immediately recognizes these divisions: old and new; classical and contemporary; solemn and whimsical. This post includes some photos and videos documenting some of the sites we saw and the activities we undertook in our 5-day visit that illustrate this dichotomy.

Once one completes the hour-long Tube trip from Heathrow International Airport into the heart of the city, the most apparent of these dichotomies is in the architecture.

As we walked along the banks of the Thames, took a bike tour of the city (more on that below) and rode the tube to various tourist destinations, there are buildings all over town that date back centuries, alongside modern buildings constructed within just the last few years. Its impossible to view the cityscape and not be simultaneously reminded of the city’s history but also with a view toward the city’s future.

These three photos illustrate the old, the new, and a blend of the two architectural dichotomies together in one photo.

The Shard, completed in 2012 and financed in part by an investment group from Qatar

We also toured Parliament, and immediately after the tour, I ran out to see if I could videotape Big Ben, the Parliament building’s western tower, as it struck 12 noon. Here’s a closer look at the classic architecture of London’s iconic clock tower as it strikes 12.

… and speaking of iconic sites of London, here’s a video I shot while riding a bike across Tower bridge. I was able to capture some footage of the bridge and surrounding architecture, all while riding a bike one-handed, narrating a video, and not getting run over by a double decker bus.

Like all great cities, London has unlimited opportunities for lovers of all kinds of art. On our stay, we visited several museums and galleries including the British Museum, the British National Gallery of Art, the “banqueting hall” at Whitehall Palace, the Tate Museum of Modern Art, and many smaller galleries. These four photos illustrate the range of the type of art one can expect to see on a visit to London.

This photo is from the banqueting room at Whitehall. The building is historically significant as the spot where King Charles I was executed (the only British monarch ever to meet such a fate) in 1649 for going a bit to far with the whole “Devine Right of Kings” policy.

The ceiling art was created by Sir Peter Paul Rubens

I most enjoy the impressionist style of painting. Here is a famous Van Gogh from the National Art Gallery, painted shortly before he severed his own ear for reasons that continue to mystify historians -and everyone else, for that matter- to this day.

This photo is of a micro-sculpture we came across in the British Museum. I forgot to write down who carved it, but I remember that it’s hundreds of years old. But what is most impressive is the detail. Imagine the painstaking craftsmanship required to carve such small details!

This photo is of our bike tour guide prior to setting off on our ride. In the background, you can see some street art. The entire length of the tunnel was painted, and according to our guide, the art changes on a regular basis as old art is painted over. 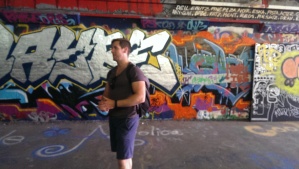 London is also a great town for live theater, rivaling New York in terms of the sheer number of theaters and the variety of shows. We saw two plays while we were in town, representing both ends of the spectrum.

An activity that should be included on everyone’s “Not To Be Missed” list is attending a play at the Globe Theater. The Globe Theaters a re-creation of the theater that William Shakespeare performed in as an actor, and then had his own plays performed that is an exact replica of the original Globe Theater. The original theater was built in 1599, but was destroyed by fire in 1613 when someone decided to use an actual cannon during a performance, which resulted in setting the thatch roof ablaze. (The replica theater, built in 1997 also has a thatched roof, complete with a 21st century sprinkler system.)

Cameras are forbidden during the performance, (we saw Shakespeare’s “Measure for Measure”, which was outstanding!), but here is a view of the inside of the open-air theater I took prior to the performance that provides a glimpse into what it might have felt like to attend a play in 17th century London.
Globe Theatre:

In stark contrast to Shakespeare, we also attended a play at a smaller theater whose name I don’t recall that was performed by an hilarious comedy group. The play was entitled “The Play That Goes Wrong”. In a nutshell, the play was a murder mystery in which every conceivable thing that can go wrong in a live performance (actors being rendered unconscious, the set falling apart, props breaking or being rendered unusable, etc…. Anyhow, you’re just going to have to take my word for it, it was fricking hilarious!

For the record, Chris saw a third play, Green Day’s musical “American Idiot”, starring someone who was a runner up in the show “X Factor”. He loved it.

I mentioned the dichotomy of solemn versus whimsical in certain cultural traditions. This incongruity is no more apparent than at the Changing of the Guard ceremony at Buckingham Palace. This incongruity is apparent nowhere more than at Buckingham Palace for the Changing of the Guard Ceremony. (Note: if you go, get there early. Even though this ceremony is a daily event, it draws a crowd of thousands. We got there 90 minutes early so that we could stand right at the iron fence and photograph the event through the bars.)

Here’s a short video I shot that reflects the solemnity and seriousness of the ceremony. After all, these guys are responsible for securing the protection of the Queen and the entire royal family, so this is serious business.

… and then, just when you start thinking, “well that was a little anticlimactic…” the marching band starts to play! Check this out! How awesome is this? The Royal Guard playing the theme from Ian Flemming’s Goldfinger!

… and what would a Changing of the Guard Ceremony at Buckingham Palace be without the Royal Guard band jamming to a little Barry Manilow… that’s right! We’re talking Copacabana!

Old and new, classic and contemporary, solemn and whimsical. London is a town of interesting dichotomies that appeal to everyone.