One of the things an American notices walking around town is that the streets, trains, buses and malls are full of American baseball fans. This didn’t strike me as particularly odd at first, until I noticed that every last one of them is a Yankee fan. I thought this might make something of a whimsical blog post, so I ran the idea of taking some pictures of the Yankee fans we encountered that day to Chris, my son, traveling companion, and blog editor. He advised me that taking pictures of random people without their permission is a good way to get one’s butt kicked, but I was determined, so I told him I would try to be discreet.

I surreptitiously snapped the photos below, all in a single trip that Chris and I took to the local mall to shop for some supplies for our apartment.

The first Yankee fan we encountered was on the walk to the train station,just a couple minutes from our apartment.

First Yankee fan viewing, on the way to the train

The second Yankee fan we encountered was getting ready to board the train.

The third Yankee fan we encountered was on the train. Here he is getting ready to depart. He might have noticed that I was taking his picture, but if he did, he didn’t seem to mind

The NY logo is a little oversized, but the colors are right

We encountered our fourth Yankee fan immediately upon entering the mall. 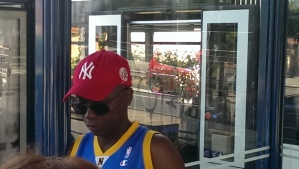 The fifth and final Yankee fan we encountered on this outing was on the train ride back to the apartment.

Another Yankee fan on the return trip

I’m not too sure how many of these fans could tell you their opinions on Derek Jeter’s impending retirement, or much else about the history of the club, but I’m a Twins fan, so who am I to judge? And if you can’t beat ’em, join ’em!

3 thoughts on “In Geneva, There are New York Yankee Fans Everywhere”