When I was telling my friend Ed (who is also a two-time Olympic rower, including a silver medalist at the 1984 Games in Los Angeles) about all the cool things were planning to do upon our arrival in Switzerland, he said, “You should definitely go check out some rowing in Lucerne!” Nancy and I met through rowing and had successful rowing careers (not like Ed’s, but successful nonetheless) and so we both jumped at the chance to attend a world class rowing event at one of the most beautiful and famous rowing venues in the entire world, in Lucerne, Switzerland.

Lucerne is about 200 kilometers north of Geneva. Like every highway I’ve driven on in our three weeks here, the roadway is in impeccable condition, and along with the beautiful scenery all along the way, the drive is as almost as much a part of the experience as the destination itself. 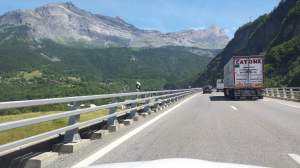 As we expected, Lucerne is a beautiful city nestled among majestic mountains. I took this picture from a hillside tower overlooking the city below. 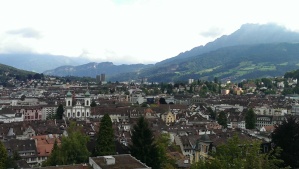 Lucerne, Switzerland from a hillside tower

After a restful night spent in a hostel that was a converted jail (complete with bunk beds and bars on the small windows) we headed off on foot toward “The Rotsee”, which is the lake that hosts many international rowing events. After some early morning rain, the skies cleared and we had perfect rowing (and spectating) weather, partly cloudy and no wind. (It’s also worth mentioning that there is no admission fee to attend this event.) The competitors were world class athletes, primarily from the European nations, but there were three races that included American entries (men’s four, women’s double scull, and men’s lightweight single scull). Canada, Russia, and China, among others, also sent teams. 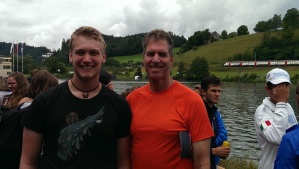 Chris and me near the finish line

One of the interesting features (I thought) of this race course is that there is a train track that runs immediately adjacent to the course. If you look above the woman’s white hat in the photo, you can see one of the trains that sped by about every 10 or 15 minutes throughout the day.

For those who can appreciate it – and I acknowledge that its not for everybody – rowing involves a blend of power, grace, speed, and synchronicity that is simply beautiful to watch and –in my view- unparalleled in any other sport. I present to you below the YouTube video of highlights of many of the races that we saw at the regatta in Lucerne. The subsequent video is video I took from our vantage point, with 200 meters to go, or the last 25 strokes of the race. (Spoiler Alert: Germany edges Russia for the gold medal!)

Here’s how the last 200 meters of the men’s eight looked from our vantage point.

The World Championships are in Amsterdam in about a month. Might be time to schedule a trip to the Netherlands!