As one would expect for any large city, the automobile is the dominant mode. However, there is an obvious difference in the types of automobiles used by virtually everyone. And that is the size of the cars. 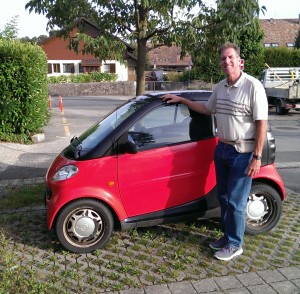 Does this qualify as a car?

Parking is very difficult in this town, which encourages people to opt for the train, bus, bike or walking, but for those who do drive, your best chance at parking is to drive a car like this one.

Public Transportation is – of course – also very popular in Geneva. The Transport Publique de Genève (TPG) is the primary public transportation system and offers both rail and bus service for commuters and for local mobility in and around the city. 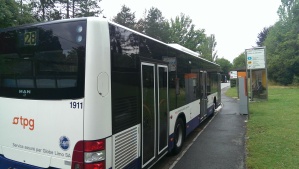 One interesting difference between the European system and the system most are accustomed to in the US is that in Europe, you purchase your ticket at the station, but no one ever actually asks to see it or takes it from you. I am told there is a steep fine for riding without a ticket, but for the dozen or so bus rides we have taken, there never appeared to be anyone interested in seeing our ticket.

Another very notable difference between most large European cities and their American counterparts is that bikes and motor scooters or motor cycles are much much much more prevalent in Europe.

Europe’s smaller cars do get significantly better gas mieage than your typical American car, but the price of gas in Geneva, for example, currently is about 1.70 Swiss francs per liter. After the conversion to gallons, and converting Swiss francs to dollars, the price of a gallon of fuel in Switzerland is a little over $7 per gallon! At that price, plenty of people opt for the less costly – albeit more risky – bike or motor cycle/scooter option.

And like most major cities, many people forego all mechanical modes of transportation altogether and travel around by foot. You can be anywhere in the heart of the city, at virtually any time of day, look around and you will see literally hundreds of people on foot, exploring the city, shopping, walking to or from work, or just out for a stroll.

One thought on “Geneva – the ultimate in “multimodalism”‘”