One feature of many European cities that I especially enjoy and that distinguishes them from a typical American city is the craftsmanship that goes into paving the streets and walking surfaces. Wander around virtually any American city, and what do you see? Concrete and asphalt mostly. But wander around any European city, and the the streets, sidewalks, boulevards, plazas are very often characterized by beautiful stonework that is itself an art form.

We visited Lisbon a few months back and since we love to explore every city we visit by foot, we discovered that Lisbon is a city where virtually all of the sidewalks and plazas are themselves works of art. Check out this short video of me wandering around the Praca dos Restauradores (one of the main city squares in the heart of the city) and you’ll see what I mean.

This style of paving, called Calçada Portuguesa, is ubiquitous throughout Lisbon and other Portuguese cities, and in fact, anywhere around the world where the Portuguese settled. In Lisbon, Calçada paving has been a trademark of the city for hundreds of years. The pavers are roughly 3-inch square blocks of limestone (the white ones) and basalt (the black ones) which are arranged meticulously to form all sorts of beautiful mosaic figures and designs. Here’s another look at the Calçada along of the main pedestrian thoroughfares.

A main pedestrian walkway under the Arch of King Augusta, with the Atlantic Ocean just beyond.

When we visited, we were told that the future of the art form is threatened by a couple key factors. One is that fewer young Portuguese are learning the trade, which in addition to taking years to master, is pretty darn hard work. Here is a picture of a worker – called a Calceteiro – painstakingly laying the stones.

This guy has some serious work to do.

Another threat to the art form is that the surface does get a little slippery when it rains. We were told that the current Mayor of Lisbon is circulating a petition to have many of the Calçada surfaces removed and replaced with safer, more traditional concrete surfaces. My reaction to that proposal was a perplexed: “where the heck are they going to start?” There must be billions and billions of stones that would need to be removed and replaced! Here’s a picture I took outside a metro station. This is representative of the sidewalks and plazas throughout the entire city! 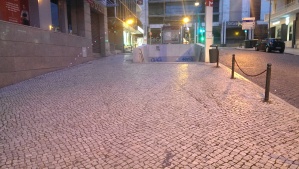 There is no way they can remove and replace all this! It’s everywhere!

If you love street mosaic pavers, you will love Lisbon. And if you do pay this beautiful city a visit be sure to take in some Fado, Portugal’s iconic traditional genre of music characterized by mournful tunes and lyrics, often about the the life of the poor, and infused with a sentiment of resignation, fatefulness and sadness. I happen to think that this performer is singing about the Mayor’s plan to dig up all the beautiful Calçada stonework. Or maybe she recently slipped on some.

8 thoughts on “If you love mosaic stone paving, you will love Lisbon, Portugal.”