About three months ago, a friend of mine happened to mention that he had registered for a “race hike” up a mountain near Montreux, on the east end of Lake Geneva. I was like, “Seriously? Mountain race hiking? That’s a thing?” and when he replied yes, I went and registered for the race.

It’s a “race”, but many of us treat it more as a challenging hike. But because participants pay for the privilege, wear a bib with a race number (mine was 1010, a good binary string, for you IT types) and a timing chip, that makes it a race. I entered in the category of “Hiker” (as opposed to “Runner”… more on that in a minute) along with about 200 other people. The starting line is on the main street of Montreux, home to the world famous Montreux Jazz Festival, so early the morning of the race, we all went down to Montreux, on the Lake Geneva shoreline (copyright Deep Purple). The finish line was the top of a nearby mountain called Rochers-de-Naye, which translates roughly to “Rocks-of-Naye” in French. The course is 18 kilometers long, but more importantly, it’s 1,600 meters (5,250 feet or essentially one mile) up. Here is a really cool two-and-a-half minute video clip I just found on youtube that shows the entire course. This is really neat. Check it out!

I arrived in Mantreux for my 7:30 race start at about 6:45 and stepped off the train into a steady rainfall. The forecast was for rain all morning, which is fine. I can hike in rain. Here’s a short video I shot of the start of the race.

The first four of five kilometers was along a narrow trail, which meant we had to basically hike in single file. I settled in behind a comparably fast hiker, shown here. 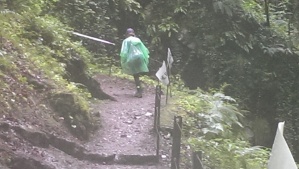 I drafted off this poncho clad woman for the first 4 K.

After five kilometers or so, the trail opens up to a narrow, paved roadway that winds through some pastures. There were no human spectators along this section of the course, so I drew inspiration from the dairy cows and goats along the way and imagined they were cheering us on. Here are some photos I took of our four legged fans. 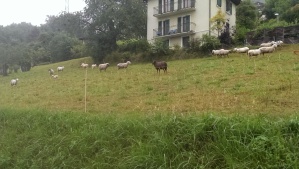 A nice feature of this race course is that it was so well marked. You always knew exactly how far you have come and how far you have to go. To illustrate this point, I took this selfie at the 8K to go marker.

Here’s another video I shot at about the same point in the race. The problem with the rain isn’t that I was wet. I was prepared for that. The problem with the rain is that it obstructed what is ordinarily a beautiful view from the mountain down to Lake Geneva and the alps across the lake. Majestic views can be a great distraction on an 18K uphill hike. But alas, on this day it was not to be.

Another nice feature of this race is the live entertainment provided at some of the water stations. I shot this as I hiked through the 6K-to-go waterstop. This trio totally rocked the alpinehorn!

It wouldn’t be a Swiss event without the Alpinehornists!

As I indicated earlier, there are some people that actually run this damn thing. The runners started 90 minutes after us, which means they started passing us with about five or six kilometers to go. This is not a problem as long as the path is wide enough for a runner to easily pass you, but the last three or so kilometers was back on a narrow (very steep) uphill trail, which means us hikers had to keep one eye on our rearview mirrors in order not to be “that guy” who doesn’t know enough to get out of the way of a runner. The winning time among runners was 1 hour, 26 minutes, by some freak of nature from Great Britain. That compares to my time of 3 hours 23 minutes. I’m pretty sure the winner didn’t stop to take pictures and videos along the way, though, so you need to factor that in.

Here’s a picture I took of a runner who was in third place as he passed me.

Some people actually run this thing, which is insane!

My goal was to finish in 3 hours and 20 minutes, and I think I was on pace to do just that, until I hit the last kilometer, which consisted of a narrow path with switchbacks every 20 meters or so, and as you looked ahead on the trail searching for the end, all you could see was a line of hikers basically right above you (as opposed to in front to you) snaking up the mountain. So my last kilometer was a little slower than the first 17. I did manage to get out my phone and record the following video as I approached and crossed the finish line. But as followers of this blog will attest, my video production skills are sometimes lacking, and for some reason there is no audio, but it still gives a sense of the scene at the finish line.

I think I’ll do this race again next year.