The idea is being “borrowed” in the U.S. and elsewhere, but to me, the traditional Christmas Market will always be a uniquely European custom. According to my research, the Germans first came up with the idea back in the late Middle Ages in the German-speaking part of Europe, and across the former Holy Roman Empire including modern day regions of France and Switzerland. Today, virtually all large European cities – and many small ones – open Christmas Markets that last the entire month of December. The markets consist of festively decorated temporary wooden stalls, situated side-by-side, that peddle food, drink and seasonal items. They also always have a stage set up where traditional singing and dancing is performed.

The most famous Christmas Market in Switzerland (I believe) is in Mantreux, a town I’ve written about before located on the east end of Lake Geneva, about 100 kilometers from Geneva. We make a point of visiting this Christmas Market every year. Here’s a photo of a couple dummies getting into the Christmas spirit.

L to R: Santa and me

As it’s name suggests, Christmas markets are a great place to get some Christmas shopping done. I bought a real nice cashmere scarf for my mom at the Mantreux Christmas Market last year that I’m reasonably sure was not a cheap knock-off. Some vendors sell Christmas themed arts and crafts that are pretty cool. Like whatever the heck these are! 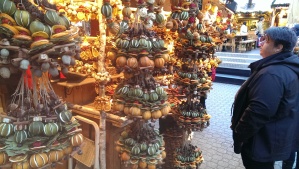 For that hard to shop for friend that has everything? Christmas gourds!

There’s plenty of good food, including candy which makes such a great stocking stuffer. My brother-in-law Cliff and sister-in-law Ellen visited last Christmas, and I was a little surprised when Ellen decided to spend 17 swissfrancs (roughly equivalent to 17 U.S. dollars) on a few chunks of this colorful nougat, which I’ve always found to taste a lot like colorful chalk. I remember thinking as she was making the purchase, “wow, Ellen must really like the taste of colorful chalk to be willing to spend 17 swissfrancs on it.” Then she tasted it. Let’s just say that her purchase didn’t make it into anyone’s stocking that year, and leave it at that.

Of course, one of the best ways to get the taste of colorful chalk out of your mouth is with a nice cup of vin chaud (hot wine) that is sold about every 30 feet. This photo below is from Budapest, where we spent a little time this Christmas season.

Nothing quite hits the spot like a piping hot cup of mediocre red wine!

It’s difficult to get a good feel for the vibe of a Christmas Market without actually strolling through one. So I did a little strolling for you. Here is a short video of the sights and sounds of a typical European Christmas Market.

5 thoughts on “European Christmas Markets – A great way to get in the holiday spirit!”