When I found out we were relocating to Geneva, my mom said to me, “Did you know that Leo lives in Geneva?”. Leo was my best friend when our families both lived in Washington D.C. when I was 8 years old, and while we had seen each other a handful of times since (he also has a strong Minnesota connection) we hadn’t seen each other for a good 15 years or so. We recently connected and made plans for me to come out to his home and then, weather permitting, do something fun outdoors. As you will see from some of the photos and video below, the weather permitted. In fact, it even encouraged. This post is directed to anyone who might still be wondering about hiking and biking opportunities in close proximity to Geneva.

Initially, I had planned to hop on a train to travel to Leo’s home in the town of Céligny about 20 kilometers along the north shore of Lake Geneva. But when I saw what a beautiful day it was going to be, and knowing I had plenty of time to get there, I decided I would ride my bike instead. Here I am just outside our apartment preparing to embark.

I didn’t get too far before I decided that I should include a quick video of a “ride by” of the plaza of the United Nations European headquarters here in Geneva. (I have toured the inside of the building twice now, and plan to feature it in a future post.)

After about an hour, I came to this sign.

Soon, I was at the train station, which I figured would be a good place to call Leo. Here is a photo depicting how thrilled he is to see me that I took in the midst of our emotional reunion.

The town of Céligny is at the base of the Jura mountain range, and so Leo’s suggested that we take a hike up a peak called La Dole. After parking my bike and getting a quick tour of their beautiful home, five of us (Leo’s wife Sarah, their son Nelson, and their corgy Fergy) got into the car and headed up to the trail head. Here is the view up to the summit of La Dole from the parking lot. (That white thing is a control tower for the Geneva airport.)

We hiked up this mountain, La Dole.

It’s about an hour hike up to the summit, but one hardly notices the effort, because every step of the way affords a view that can’t be described with mere words, which is why I took this photo. I took a video too, but the wind was blowing too hard, so the audio didn’t turn out well, so this photo will have to suffice. (You are going to want to click on this one to get an enlarged view.)

Our view from atop La Dole.

Yep, I know what you’re thinking. You’re thinking, “you expect me to believe that Fergy the corgy made it all the way up to the summit of La Dole?”. Yes, I do, and here’s the proof. 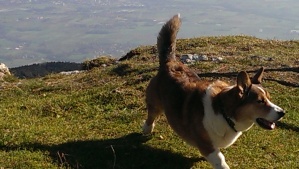 Fergy at the summit of La Dole

We made our way back down the mountain to the car, and then went out for a late lunch of pizza. Afterwards, we headed back to Leo’s, said our goodbyes, and made plans to get both families together at Christmas.

I still had a 20 kilometer bike ride ahead of me, so I climbed back on my bike and pointed it toward Geneva. Yes, my legs were a little wobbly on the away back, but fortunately, I had this view of the Alps (that’s Mount Blanc, Europe’s highest peak) to keep me company the whole way home. 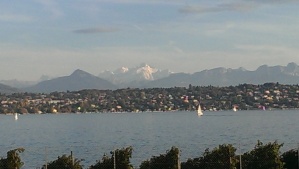 The view of Mount Blanc from my bike

3 thoughts on “A glorious bike ride and hike, and a reunion with my 2nd grade BFF Leo!”