Back in August, we took 9 days and drove across the “Massif Central” of France to visit friends on the French/Spanish border, near the town in the Basque Country called San Sebastian. We had decided that on the way back home, we would take a more southerly route and retrace the path our family had taken 12 years ago in order to visit the towns of Arles and Nimes.

I know what you’re thinking. “Why would you revisit places you’ve already seen when there is so much more to see that you’ve never seen?”. That’s a fair question. But the answer is simple. There are some sites that are worth seeing twice, and also, Chris was only 5 at the time, and since he had no recollection of our previous visit, we wanted to make memories for him.

A quick refresher on ancient Roman history: Two thousand years ago, the south of France was a province of the Roman Empire known as Narbonensis. The province is home to what is now the southeastern region of France, extending from the Spanish border to the French/Italian Alps. Present day Arles and Nimes were once significant Roman settlements in the Narbonensis region. (In more recent times, Arles has become famous because a pretty good painter by the name of Vincent Van Gogh spent some time there.)

My intention for this post is to simply share our experience visiting two structures, both built in the first half of the first century by the Romans (along with a significant contribution of slave labor, it should be noted.) These are 1) the coliseum in Arles; and 2) the Pont du Gard aqueduct near the city of Nimes.

Our first stop was in Arles (French pronunciation rhymes with “Carl”), where we spent the night. Our preference is to visit the coliseum after dark when it is fully illuminated, so we waited until after dinner to walk over to the coliseum. (I since learned, by the way, that this coliseum is featured prominently in the movie “Ronin” starring Robert DeNiro, so I rented the movie. It was pretty good, but I digress.). I understand that the arena is still used today for occasional bullfights, concerts, and plays. (If you’ll permit one quick additional non-sequitur, I wonder how many existing NFL stadia will be operational in the year 4014??)

Here’s a photo of the coliseum.  The tower on the left was added in the sixth century when the coliseum was used as a fortress. (Like many present day stadia, it was a multi-use facility.) 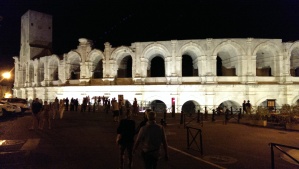 The coliseum in Arles at night.

As fate would have it, we also happened to time our stroll around the coliseum to coincide with this street performer, who I hope makes a decent living as a professional musician, and isn’t reliant only on the change people like me tossed into his guitar case.

The next day, our final day on the road back home, we took the short detour off the main highway to visit the Pont du Gard, an aquaduct near Nimes (French pronunciation rhymes with “Kareem”). Mere words cannot describe the sheer awesome scale of this structure. I am sure that the same thought occurs to everyone when they first see it, and that thought is, “How the hell did they build that??”. The aquaduct was constructed to move water from the Uzès Mountains to the village that is now Nimes, a distance of 50 kilometers.  But here is the amazing part: The system worked entirely from gravity (i.e. the water flowed downhill) but the difference in the altitude from the source to the village was a total of 12.6 meters! That means that for every kilometer, the variance in the channel was only about 24 centimeters!

Here’s the photo of the Pont du Gard:

I have many friends who are structural or civil engineers. And I have many other friends who are not. In either case, if you ever find yourself in the south of France, I very strongly recommend a visit to these awesome engineering marvels.